Where do Essential Oils Come From?-

In my office, I have a spectacular potted geranium. I love to sit and stare at it while I think about what tasks I should be doing next. Sometimes I reach over and rub the leaves between my fingers. The leaves are soft and velvety and my fingers come away with a lovely green-summery scent. That scent is from the essential oils in the plant.

How we get the essential oil from the plant is a mind-boggling idea. It requires, for example, as much as 2000 pounds of rose petals to create one pound of essential oil! For a frame of reference, the next time you’re in the grocery store, look at a bag of spinach. The regular bag is between 5-9 ounces. It takes an enormous amount of plant material to make a relatively small amount of oil. 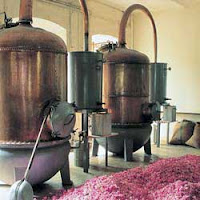 Most essential oils are extracted from plants through the process of distillation. This process has been used for hundreds of years and is still the best way to extract oils from plant materials. The process is surprisingly straightforward and it uses a basic, albeit large, still.

When plant material is exposed to boiling water or steam, their natural occurring essential oils evaporate. The resulting steam carries the oils through the still tubing so that it cools and creates condensation. This condensation, which is made up of water and essential oils, is collected in a Florentine flask. The Florentine flask is merely a collection container. (named for the city that was known for distilling essential oils in the Renaissance). The still can easily separate the oil from the water, since oil and water do not mix.

An even older method of extraction is enfleurage. Plant material is layered with fat, preferably animal fat, between layers of glass. The flowers are periodically removed and then replaced with fresh material. Very labor intensive, this process is repeated over a period of weeks, resulting in what is called pomade.

The pomade used to be applied directly on the skin or hair. These days, the fat is removed with alcohol which carries the essential oils and separates it from the fat by chilling it. The alcohol is distilled off, resulting in a semi-solid product called an absolute d’enfleurage. Technically not an essential oil, this product still contains volatile compounds. They are sometimes coded with a number, signifying the number of times the plant material was replaced.

Solvent extraction is a method in which the plant material is submerged in a solvent. The solvent dissolves the oils, waxes and pigments from the plant material. The solvent is then removed through evaporation under pressure. A soft, sticky wax called a concrete is the product of this process. The concrete can then be used in cosmetics, but to extract the volatile compounds, the concrete is mixed with ethyl alcohol and chilled so the waxes are solidified and the volatile compounds are diluted in the alcohol. The alcohol is removed by vacuum distilling the mixture. The resulting product is called an absolute.

Since the solvents used in this product are sometimes toxic, absolutes should never be used internally. Nontoxic solvents are being researched and new methods of extraction are being developed to remove all trace of solvents from the resulting absolute, so absolutes now are safer than they have been in years past.